Welcome to the 6th stop on the Contract Management learning line. At this skill station, we learn to define process milestones -- flags that let us see at glance the process stage that a contract-record is in.

Learning Concepts at this Station:

At the end of the previous skill station, you visited a record and were in the Activity tab. There, you saw how to see where the record was in the process flow. But in the same area, you saw two other items under the Milestone Progress heading: Processed, and Contract Submitted. 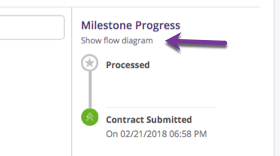 Those two items are milestones that are automatically created for every stream. "Contract Submitted" is where the process started. So that icon is a solid green. "Processed" is the state where processing has completed. For a record that has not completed, that icon is gray. When completed, it too turns to green.

In the remainder of this skill station, we will see how to add additional milestones between the process-start and process-end, and we will see how to specify escalation actions that are triggered when a milestone is not being achieved in timely fashion.

Milestones also have a status. Typically, all milestones after the first off the distance, and of little concern. But at some point, each milestone in turn becomes active. When it does, its status will be one of:

Something important to keep in mind is that there are two ways to think of milestones:

As you've seen, milestones that have been completed are darker and/or filled in. The are also colored, to depict their status:

We'll start by creating a new version of the contract management stream, so we can work on it without impacting anyone else. (The current version will remain in use when new records are created, until our changes are published.)

Clicking the heading opens the edit dialog. On the left, you see the two milestones that have already been defined. There is also a new Add Milestone button.

On the right, you see the data for the currently selected milestone. There isn't much data for the starting milestone, other than a title. But when you click on the Processed milestone, you see a couple of additional features that will be present for milestones you create.

Here, we can set a due date (in one of several ways)  and we can set up add one or more  escalations (each of which can take one more actions) when things aren't happening in the expected timeframe. We will explore those features next.

Adding a Milestone and Attendant Escalation

In the process we defined for a contract submission, there are several critical milestones we want to identify:

In the same way that we can add escalations to tasks in a process definition, we can add them to milestones, so we can take action to expedite things, when needed.

Let's do that now:

Next, let's the other two milestones we need, but without any escalations:

Changing Milestone Status from a Task

A moment ago we saw how to add escalations to a milestone, and how to use them to change milestone status. We can do the same things from any User Task step in the process. We will start by changing milestone status.

Once completed, the milestone is no longer active, and the escalation we defined in it no longer applies.

For Extra Credit...
In the Additional Contract Review step, use Event Actions to set the Executive Signoff milestone to "Started" when the task is created, and add an additional action to the "Task Completed" event to change the milestone status to "Completed".

Not every user task results in a milestone. but user tasks may also need to be acted on if they do not occur in timely fashion. For that reason, user tasks can also be escalated.

In short, you have a lot of options when you escalate a task. Take a moment to explore them.

Note:
If a user task does result in a milestone,  it's best to keep escalations together in one place, if you can. For example, after a contract is submitted, we set up an escalation on the "Approved by Supervisor"milestone, requiring it to be completed in 5 days. Since we create a review-task for the supervisor, it is possible to escalate that task, as well. That would give us two sets of escalations, defined in two different places. For sanity in such cases, it's best to keep the escalations either in the User Task, or in the Milestone.

So far, you have seen several ways to set milestone status:

There is just one more situation to handle: The case where the process reaches a stage that needs to be recorded, but with no user task preceding it.

Such situations occur frequently when there are automated integrations (the subject of a different tutorial!). In this scenarios, you receive a response from some external situation and when you do, you want to set a milestone that records the event.

In our scenario, that situation occurs after the contract is signed. As an automated step, it doesn't have the capability for event actions or escalations. So, to make sure the process has the correct milestone status, we will add a special step to the process flow:

To learn more about milestones, see Stages and Escalations in the online help system.

Taking the Next Step

Awesome! You are one skill station away from finishing this learning line. At this point, you have added milestones and escalations to the process, and have seen all of the ways you can set milestone status. At the next skill station, you will find out how to run reports on the stream's Line Items data component and, in particular, how to "roll up" that data in various ways, to produce the most useful possible reports.

Back to previous station Continue to next station